You are cordially invited to  … 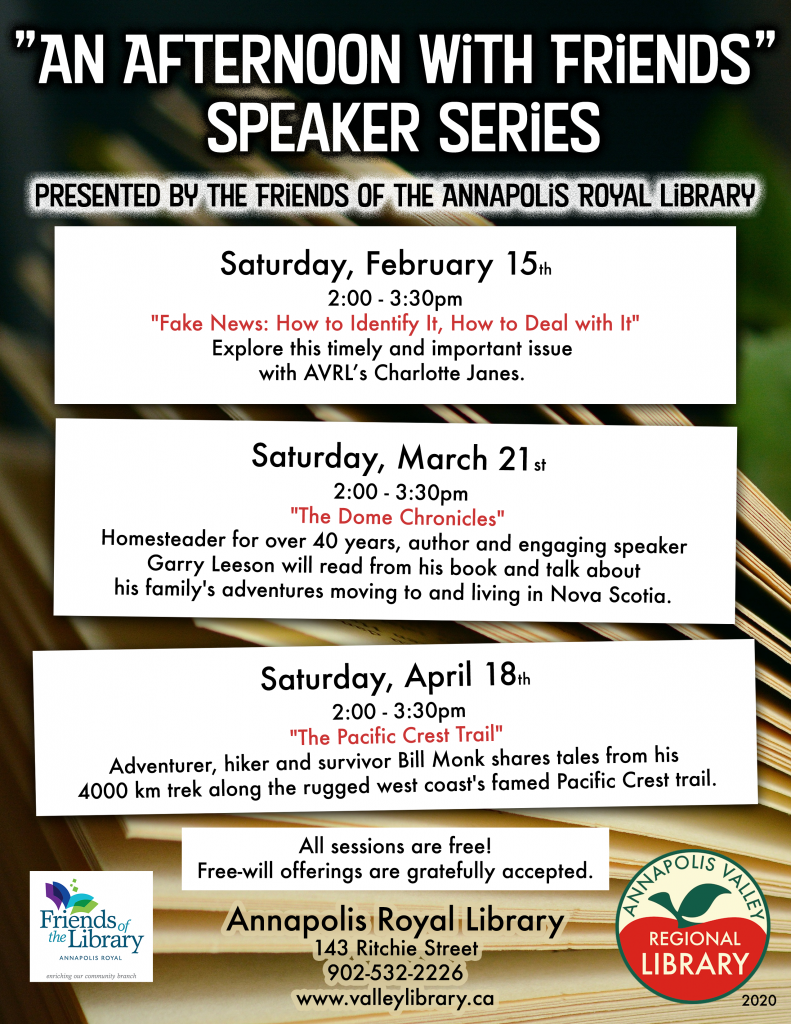 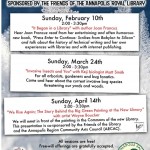 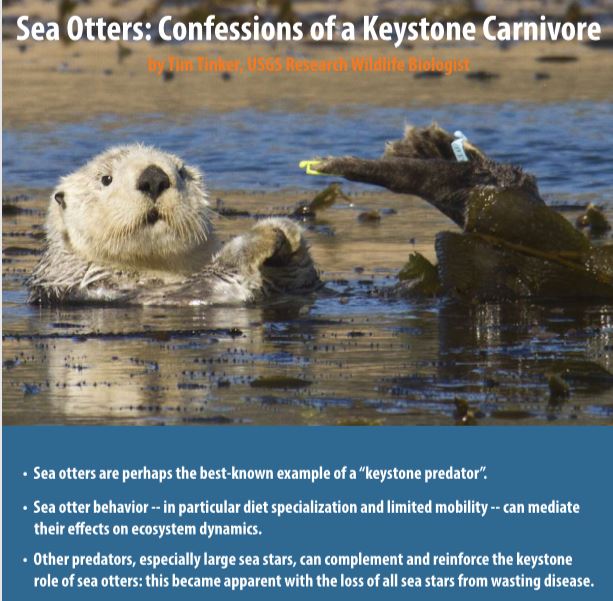 Abstract: Sea otters are perhaps one of the best-known examples of a “keystone predator”: their strong top-down influence in rocky sub-tidal food webs can lead to a shift from an urchin-dominated state to a kelp dominated state, which in turn can increase productivity and cause dramatic changes in community structure and dynamics.  This basic story has become a text-book example of the importance of predators, and as sea otters have recovered from near-extinction over the last century, this general pattern has repeated itself at sites from the Aleutian archipelago to British Columbia.

EVERYONE  welcome and there is no charge!
(Free-will donation to aid in library expansion welcome though!!)

Celebrating our 8th year of presentations
that inspire your curiosity and your imagination.
Sponsored by Friends of the Annapolis Royal Library
St. Luke’s Church Hall Saturdays 2:00pm to 3:30pm
Free will donations will be accepted in support of the renovations
to the new Annapolis Royal Library at the Academy (formerly ARRA.)

Saturday FEBRUARY 17th
“Canada and International Peacekeeping. The Facts Behind the Myth”
Alex Morrison, Founding President of the Pearson Peacekeeping Centre, Retired
Career Military Officer, Current Annapolis County Councillor
discussing the genesis of United Nations peacekeeping, the role of Canada
in peacekeeping past and future, as well as the current state
of international peacekeeping.

Saturday MARCH 10th
“ A History of the European Grand Tour ”
Wayne Smith, Executive Director, Annapolis Heritage Society
Young English elites of the 17th and 18th centuries often travelled Europe
in an effort to broaden their horizons and learn about language,
architecture, geography, and culture. Discover the history of this
form of travel and view some typical examples of
“Grand Tour” souvenirs that formed European collections.

AN “AFTERNOON WITH FRIENDS” 2017 Series

On April 22 at 2:00 p.m. as part of a day of special programming at the Academy hosted by the Friends of the Library, we are privileged to welcome well-known historian and Author Brenda Dunn. Her talk is entitled: “Fort Anne, An Icon in Canada’s Historical Landscape”. Brenda will reach back into historic documents starting in 1854 when the last Garrison left Fort Anne, and explore the years leading up to its creation as Canada’s first “Dominion Park”.  She has immersed herself in the history of Fort Anne for the majority of her career with Parks Canada, and has discovered and shared the history of this place with countless individuals through many presentations, research reports and her book Port-Royal – Annapolis Royal 1605 to 1800.

Brenda obtained her Bachelor’s degree from Acadia and a Master’s Degree from Ottawa University before embarking on a career with Parks Canada that began at Louisburg, and eventually led her to Halifax where she delved into the stories of the Citadel, Green Gables, Grand-Pré and Castle Hill National Historic Sites.  Parks Canada and we at Fort Anne in particular have been blessed with the knowledge and generosity of Brenda’s time for over twenty five years – both while she was employed with Parks Canada, as a contractor and as a volunteer.  She has contributed to projects too numerous to mention, and her work has helped with key decision-making for management planning, exhibit development, and new programming – including detailed research that supported the design of the Fort Anne Heritage Tapestry.

Please join us at the Academy at 2:00 p.m. on April 22 [Please use the Ritchie St. west entrance and follow the signs] for fresh insights into some of the more recent history of Fort Anne’s evolution from garrisoned fortification to National Historic Site.

Afternoon with Friends
On Saturday, March 11 at 2:00pm at St. Luke’s Hall*,  the second in our winter series  “An Afternoon with Friends”  is scheduled.  Ian Lawrence, from the Annapolis Heritage Society has agreed to come and tell us about his work on the newly found  Cronin Papers.  He has been researching this collection of letters and papers from the 1700’s and early 1800’s associated with the Cronin family of Karsdale.  Come out and hear about this interesting collection of papers and what they reveal about the lives of the Planters and Loyalist settlers in this area.
*Note Regarding venue: Ian Lawrence’s talk will be in the Rosette Room at St. Luke’s. The Fabric Arts folk are having an all day event in the main hall.  The Rosette Room is best reached via the Victoria St. Entrance. Up the stairs and to the right.  A lovely location for this talk.  See you all then.

Autumn Speaker Series – Travellers’ Tales
The Friends of the Annapolis Royal Library invite you to the second in our autumn Travellers’ Tales speaker presentations. “Documentary filmmaker Tim Wilson (Griefwalker, The Last Weir) takes us to remote Fogo Island, Newfoundland, often rhapsodized as “the edge of the earth”. It’s the site of a bold experiment in contemporary art and social entrepreneurship — and a stunning, much-lauded “geotourist” Inn that’s been modelled on a fishing shack. In a presentation entitled “The Little Island That Could”, Tim will present excerpts from his films and photographs, and tell stories of his adventures. Please join us on Saturday, November 12, 2016 from 2:00 to 3:30 p.m. at St. Luke’s Hall, St. George Street Annapolis Royal. You are invited to make a free-will donation to the Friends of the Library fundraising campaign to relocate the library to the Academy. For information call 902-532-0856.

In the late summer of 2015, the community of Annapolis Royal and area raised funds to send artist Wayne Boucher to see his paintings transformed into carpets at the refurbished Canada House, London, UK. Wayne’s talk and visual presentation will tell the story of his visit to Canada House, and his subsequent six weeks as artist-in-residence in Cromarty Scotland. Cromarty is on Scotland’s North Sea Coast and is about 45 km’s north of Inverness on the Black Isle of the Scottish Highlands. Cromarty (population 700) is an enchanting 12th century medieval Royal Burgh sharing many similarities with the vibrant cultural milieu of Annapolis Royal and the Annapolis Basin area. Wayne was joined for part of the trip by his wife Terry, Nat and Susan Tileston of Karsdale, and friend/hostess Hilary Mackay of Scotland who guided us through this magical adventure of England and Scotland.

With some 10,000 or more species, our little corner of the world is blessed by a diversity of living things. Most of them we never see. From tiny metallic bees, to flower-like sea anemones, to flocks of a quarter million sandpipers, we are surrounded by a wealth of creatures. Some are familiar, most aren’t. Many live, largely unnoticed, right under our noses, others inhabit places few people visit. Each one is an integral, superbly adapted element of the particular ecosystem in which it lives, a unique and truly beautiful expression of the creativity of evolution. Scott will present photographs from his upcoming book (fall 2016) on Atlantic Canada’s biodiversity and share his thoughts on our relationship (or lack thereof) to such diversity of life and nature in general. He will also share anecdotes relating to the capturing of the images.

Saturday April 16th, 2016
“Port-Royal NHS – 75 years in the making:
The story of the Construction of the Habitation and its furnishings”
with Anne-Marie Lane-Jonah, Parks Canada Historian,
Wayne Melanson, Parks Canada Interpreter, and
Alan Melanson Past-President Historical Association of Annapolis Royal.

Challenges after the outbreak of World War II impacted furnishing the reconstruction of the Port-Royal Habitation which had begun in 1939. When the completed reconstruction was transferred to the National Parks Branch, on February 27, 1940, it had not yet been furnished. It had been hoped that many suitable antiques would come from France, but the war made that impossible. Local craftspeople provided some work based on Jefferys drawings, and as well, funds were raised in Massachusetts to acquire some pieces, while some items were loaned by the National Museum in Ottawa. However, labour shortages caused by the war were a problem and the reconstruction remained sparsely furnished. The urgency of finding alternate sources for appropriate furnishings and objects for the reconstruction was apparent at the time of the official opening in July of 1941. The site opened with a mix of borrowed antiques and reproductions and the gift of several large water colours by C.W. Jefferys. With the mix of objects used that summer, those involved in the project saw the advantage of using good quality reproductions rather than antiques, as these could be used by presenters and handled by visitors, eliminating the need for historical barriers in the reconstructed rooms. Learn about where these reproductions originated, at this presentation that marks the 75th anniversary year of the Official opening of Port-Royal National Historic Site. Anne-Marie,  Wayne and Alanwill share their insights into some little-known stories about those early years in the history of this reconstruction of Champlain’s Habitation.

AN AFTERNOON WITH FRIENDS 2015

for a series of presentations to inspire
your curiosity and your imagination.

we have invited Katie McLean from the Clean Annapolis River Project
to speak on Species at Risk. Learn about flora and fauna at risk in
our area and in other areas of Nova Scotia, and learn how species
at risk are designated by the provincial and federal governments.